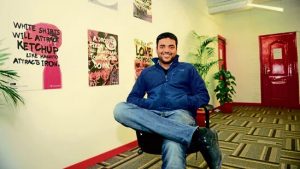 Restaurant aggregator and food delivery company Zomato’s stellar debut at the stock market with a 66% jump in the share price pushed the fortune of company’s founder Deepinder Goyal close to the $1 billion mark. According to a Bloomberg report, Goyal is worth $650 million based on his current 4.7% stake in Zomato which would double if he chooses to exercise his 368 million options vested over the next six years.

“We are going to relentlessly focus on 10 years out and beyond, and are not going to alter our course for short term profits at the cost of long term success of the company,” Goyal said in a letter to stakeholders.

“The tremendous response to our IPO gives us the confidence that the world is full of investors who appreciate the magnitude of investments we are making, and take a long term view of our business,” he added.

During his time at Bain & Co, Deepinder Goyal, an IIT graduate, turned a weekend venture named foodiebay.com into a full-fledged startup and bagged $1 million in early funding from internet pioneer Sanjeev Bikhchandani of Info Edge India Ltd. The name was changed to Zomato as the startup attracted several global investors including Sequoia Capital and Jack Ma’s Ant Group Co.

The Gurgaon-based company expanded in 100 cities across 19 countries but the loss-making venture forced Goyal to cut jobs and geographies. An impressive debut at the stock market has given hopes to other food startups and also presented an opportunity for retail investors.

“I don’t know whether we will succeed or fail – we will surely, like always, give it our best. But I hope that the fact that we are here, inspires millions of Indians to dream bigger than we ever have, and build something way more incredible than what we can dream of,” wrote Goyal.