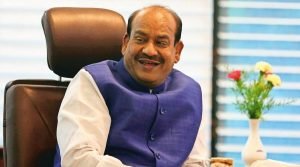 Lok Sabha Speaker Om Birla completes two years in office on Saturday. He talks to The Indian Express on a range of issues.

The pandemic has forced many governance processes to be online. At a time when even the Cabinet meeting is held virtually, what stops Parliament from allowing standing committees to meet online?

Rule 266 of Rules of Lok Sabha clearly says the standing committee meetings should be held in private. It can be made public only with special permission only when it is necessary. So the rules do not allow virtual meetings of parliamentary standing committees. If we have to change the rules, there has to be discussion on it in the Rules Committee in which every party has to express its views. Once it is done, it has to seek the mandate of the House.

We have nothing to do with Cabinet meetings or anything else, but we have to follow the rules. Anyway, I have never given any instructions not to hold standing committee meetings.

But you make the rules. Have you tried changing the rules?

In the case of committees, of the 16 committees, 14 did not want to have virtual meetings.

Earlier this week, five MPs of Lok Janshakti Party approached you to change its leader Chirag Paswan. Within hours, it was changed on the Lok Sabha website. This has drawn criticism.

We take swift decisions in any such case. When the BSP wanted to change its Lok Sabha leader, it happened in half an hour. In this case, the LJP held a meeting of their party and gave us a letter saying it’s the party’s decision. We had got the copy of that decision. If anyone had raised an objection before it or even after it, I would have looked into it. But if someone objects to it at a press conference after two days, what can we do? Still we will look into that aspect also.

Even if one person writes to me, I will look into it.

The Covid situation has brought up one more issue — the MPLADS funds were cut, salaries were slashed, but some MPs are saying the district hospitals in their constituency received no assistance or upgrading during the pandemic. Is it not an issue that you should be taking up?

There are two issues — the government has accepted the proposal after both Houses of Parliament had expressed its desire to have a new building. Whatever development is there on that front, the government cannot go ahead without Parliament’s consent. Where is the question of the government’s insistence on coming here?

Every party leader and every committee chairmen was part of that decision. No one objected to it. There is a need for a new Parliament House building when you think about the needs and requirements of Parliament in future. Our old building is still magnificent, but there is no scope to expand it. We need to take the digital, spatial and security aspects into consideration. There will be delimitation and the number of members will go up, security measures have to be modernised and digital facilities have to be improved. The new building will have less maintenance.

But you being the custodian of Parliament complex do not seem to be having a big role in it because the government has made it a project of it, at least in public perception.

I don’t think so. A Parliament committee always supervises the process and the progress. CPWD will continue to be in charge of it, the work has to get done by the government, but with our permission only.

There is much talk about Parliament’s sanctity — while the ruling side blames the Opposition for disruptions, the Opposition criticises the Prime Minister and the government for diminishing its importance by not being present in the House always. Your comment.

If Parliament is not taken seriously, how is it that we have such constructive participation of both sides in the lawmaking process? In the 17th Lok Sabha, there has been maximum participation of MPs in legislative business in Lok Sabha’s history. Look at the productivity graph, it’s the highest now.

Is the way to measure the quality of the House and the productivity of a legislature only on the basis of numbers?

In the last two years, lack of quorum did not lead to adjournment of the proceedings. A total of 1,477 participation happened in government Bill discussions in the five sessions. Total duration of discussion also is the maximum in this since the 14th Lok Sabha at 262.55 hours. The first five sessions witnessed 3389 matters of urgent public importance were taken up.

There has been criticism against the government for rushing through Bills. Parliament passed the controversial farm Bills without sending them to the standing committee. Then the Supreme Court stayed its implementation. Another key Bill, the Citizenship Amendment Act, was passed two years ago, but the rules are not framed. Does it not show there is something lacking in the process of lawmaking?

The CAA Bill was passed after eight hours of discussion. The farmers’ Bills were discussed for more than five hours although the business advisory committee (BAC), in which floor leaders of major parties are there, had decided to have a four-hour discussion. As Speaker, my duty is limited to Lok Sabha. I cannot talk about other stakeholders.

Each pillar of democracy should perform its functions separately. No one should transgress into the other’s roles. The court has the powers to review the laws that are made. The court may have used its constitutional rights to look into those laws.

But it is always good if every institution works within its own powers and should not transgress upon each other’s functions.

You are completing two years in office during which the House witnessed some tumultuous sessions. Was there any incident that really pained you?

No. In fact I am happy with the support everyone has extended to me. Every party has backed me. The Prime Minister and every leader have supported me. I will continue my efforts to take everyone along. I will try and talk to every party to run the house smoothly.

Do you think the government also should make more efforts to take everyone along?

I think the government does that. It holds discussions with every party during every session. I hope the government will make such efforts in future also.