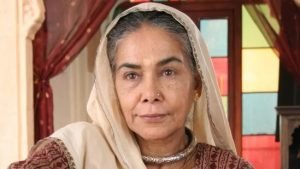 Surekha Sikri died of a cardiac arrest at the age of 75 on Friday. She became a household name in the twilight of her career, thanks to Balika Vadhu. The veteran actor played the cunning grandmother in the television series for eight years. But she was a decorated industry veteran before Balika Vadhu as well.

Surekha Sikri was a graduate of the National School of Drama. Her first step into the industry was with Amrit Nahta’s Kissa Kursi Ka in 1978, which was banned during the Emergency in India. Speaking about the movie with Scroll in 2015, Surekha had said she was still with NSD’s repertory company when she was offered the role. “I was pretty green regarding film work. I recall when I saw the film eventually that they hadn’t kept track of continuity – scenes would start in one place and end in another,” Surekha said, adding that most of the film was shot in New Delhi.

A decade later, Surekha stunned the industry with her performance in Tamas. Directed by Govind Nihalani, the 1986 mini-series was set against the backdrop of the partition with Surekha essaying the role of Rajjo. Her performance won her the National Award for Best Supporting Actress. While she picked up a handful of roles after Tamas, Surekha made the headlines once again by bagging yet another National Award for her 1994 movie Mammo. She starred alongside Farida Jalal and Rajit Kapoor in the Shyam Benegal film.

Surekha continued to play supporting roles in films through the first half of the 1990s before she turned towards television. On the small screen, she became a household name when she appeared in the family comedy show Just Mohabbat, in which she played a school principal. She also appeared in films such as Zubeidaa, Mr and Mrs Iyer, and Humko Deewana Kar Gaye among other projects.

However, her popularity reached newer heights when she took on the role of the grandmother in Balika Vadhu. Audiences had a love-hate relationship with Surekha’s Dadisa. Speaking about the show with Hindustan Times in 2016, Surekha had said, “It was a wonderful role. It was a great opportunity, and I really enjoyed playing the character of the matriarch. Initially, the show’s story was gripping. Then it lagged a bit, and soon, it picked up. But the last leg of the show was a little weird, as far as my character was concerned. However, I stayed till the end, as it was a commitment I had made.”

After Balika Vadu ended, Surekha continued her journey in the television industry with shows such as Pardes Mein Hai Mera Dil… and Ek Tha Raja Ek Thi Rani… But she returned to the big screen in 2018 with Ayushmann Khurrana’s Badhaai Ho. Her role as the actor’s on-screen grandmother won Surekha her third National Award.

Sharing her reaction to the victory in an interview with Zoom TV, Surekha had said, “Mera pehla reaction tha… Mujhe laga arre ye kya ho gaya… (My first reaction was of disbelief) the director of the film called me to congratulate me, and even he deserves an award. Ayushmann has also won an award. I am extremely happy about it. Everybody worked hard on this film and now it feels so good. Families out there watched the film and enjoyed it, I am so grateful. Very excited about the win.”

Although her health deteriorated in recent years, Surekha was clear that she wasn’t ready to retire. Speaking with former journalist Rajeev Masand in 2018, Surekha had said, “Retirement is an outdated word left to us by the British… There’s no limit to your work. Do anything you enjoy! Retirement doesn’t mean anything. You bet I have a lot of work ahead of me yet.” She continued to work until 2020, when she appeared in Ghost Stories, before her health and the lockdown restricted her from working.

Surekha, whose husband Hemant Rege died in 2009, is survived by her son Rahul.