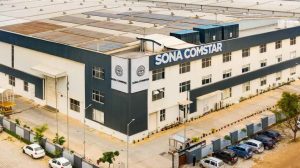 Sona BLW Precision Forgings shares kickstarted the first day trade at Rs 302.4 on the BSE, a 3.9 percent premium to issue price of Rs 291 per share.

The listing was on expected lines given the tepid response to public issue and higher share of offer for sale in total issue size.

The stock opened at Rs 301 on the National Stock Exchange, up by 3.4 percent.

The offer comprised a fresh issue of Rs 300 crore and an offer for sale of Rs 5,250 crore by the selling shareholder Singapore VII Topco III Pte. Ltd, an affiliate of The Blackstone Group.

“Considering its lower-than-expected subscription demands to its initial public offering (IPO) we expect lower single-digit or muted listing gain as risk concerns weigh more over positive rationales. Thee valuations were not so attractive compared to its peers on fundamentals with high competition in domestic as well as in global markets resulting in low-profit margins,” said Prashanth Tapse, VP Research at Mehta Equities.

Sona Comstar, a technology and innovation driven company, derives around 40 percent of its revenues from high growth areas like battery electric vehicles (BEV) and hybrid vehicles. It is among the top 10 players globally for differential bevel gears and for starter motors for the passenger vehicle (PV) segment.

It had 5 percent market share for differential bevel gears, 3 percent for starter motors and 8.7 percent for BEV differential assemblies. They have a diversified customer base across the globe with 75 percent of their income (sale of goods, FY21) coming from end-use in overseas markets.

The shareholding of promoters Sona Autocomp and Singapore Topco has been reduced to 67.3 percent from 100 percent post issue.