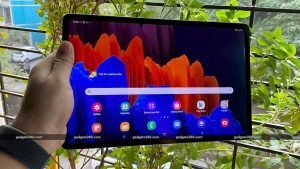 The specifications and pricing for the three alleged Samsung Galaxy Tab S8 series tablets were shared by a tipster on Twitter. All three models are expected to feature the same rear camera setup, quad speakers, and 45W fast charging support. They are offered in Wi-Fi, LTE, and 5G options, as per the tweet that was first spotted by Gizmochina. The publication cites South Korea’s Naver.com for the information but appeared blank when Gadgets 360 tried to access it. It should be noted that Samsung has not officially shared any information about the Galaxy Tab S8 series so this information should be taken with a pinch of salt.

Samsung Galaxy Tab S8+ specifications, price (expected)
Samsung Galaxy Tab S8+ is said to feature a 12.4-inch OLED display with 120Hz refresh rate. It could be offered in 8GB + 128GB and 8GB + 256GB storage configurations. It is expected to carry the same rear camera setup as the Ultra variant but come with a single 8-megapixel camera at the front. The tablet may be backed by a 10,090mAh battery and weigh 575 grams.

Samsung Galaxy Tab S8 specifications, price (expected)
Galaxy Tab S8 is expected to come with an 11-inch LTPS TFT display with 120Hz refresh rate. It is expected to have the same configurations as the as the Galaxy Tab S8+, as well as the same front and rear camera setup. It could be backed by an 8,000mAh battery and weigh 502 grams.