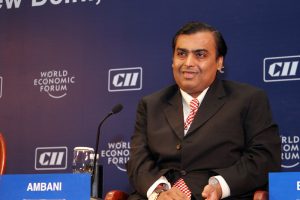 Company Chairman Mukesh Ambani unveiled a Rs 75,000-crore green energy plan as he also laid out for the shareholders the growth path for the conglomerate’s telecom, retail and O2C businesses.

Addressing the AGM virtually, Ambani said the company’s performance continued to be outstanding even during the challenging time of coronavirus pandemic.

“I am happy to report that even in a challenging environment, your company’s performance continued to be outstanding. Our consolidated revenue was nearly Rs 5.4 lakh crore, with a sharp increase from our consumer businesses. Our consolidated EBITDA was nearly Rs 98,000 crore, and almost 50 percent of the EBITDA was contributed by consumer businesses,” he said.

The company’s Chairman announced the launch of a new energy business while he also highlighted the growth plans of Jio and Reliance Retail.

“Let me tell you, in all humility, that New Energy is the most exciting, most challenging and most purpose-driven mission I will be pursuing in my life,” Ambani said.

The company plans to build four giga factories as part of the environment-friendly initiatives. Giga factories will manufacture and fully integrate all the critical components of the “new energy ecosystem”, Ambani said.

He also announced the launch of a new smartphone. “‘I am pleased to announce that Google and JIO teams have jointly developed a truly breakthrough smartphone, that we are calling JIOPHONE Next,” he said.

“It is a fully-featured smartphone, supporting the entire suite of applications from both Google and Jio, as well as the Android Play Store through which users will have access to the entire universe of Android Apps. It is powered by an extremely optimised version of the Android Operating System, that has been jointly developed by JIO and Google, especially for the Indian market.”

The company is focused on the next hypergrowth opportunity in clean technology. ‘MEGA’ plan is unique in a global context and can spur re-rating. ‘MEGA’ plan raises investment cycle clarity and reduces the holding company’s discount worry. The shift in capital allocation to renewables/decarbonisation capex should lift multiples. The company’s partnership approach in new energy business should not cause de-rating.

The key highlight was the $10-billion capex in the green energy business over three years. We build in Rs 100 per share in our target price for new energy/renewable business. The company is clearly embarking on its new capex cycle. The new cycle though looks smaller at this stage against previous cycles. Value accretion to increase as RIL ramps up execution on these businesses.

New energy taking precedence over Jio platforms and retail. We view the shift to new energy as a significant ESG positive. New energy will provide the next leg of growth. We believe gas will be a key driver contributing Rs 10,000 crore to EBITDA by FY24. Jio and retail to contribute half of the company’s EBITDA by FY25. We still see huge scope for its O2C business to be a major contributor.