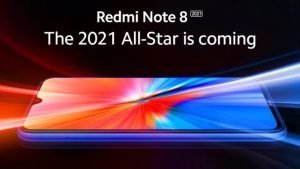 Xiaomi earlier this week confirmed it would soon launch the 2021 edition of its popular Redmi Note 8. It follows the announcement that the company had sold whopping 25 million units of the phone globally. There is already a lot of buzz around the 2021 version of the Redmi Note 8. Here’s a brief round-up of everything we know.

Xiaomi’s Redmi has also shared the official render of the upcoming phone. The photo reveals the phone has a waterdrop notch on the front. You can also notice the bezels around the display. The render confirms the phone will come in blue colour options. Additionally, it further reveals the phone will have a sim slot on the left edge. As GSMArena points out, volume and power buttons are on the right edge of the phone.

Xiaomi has not yet disclosed the specifications of the Redmi Note 8 2021. Recent leaks, however, give a good idea about what to expect from the phone.

Xiaomi had launched the Redmi Note 8 series in India in 2019. The Redmi Note 8, the base model in the lineup, featured a 6.3-inch full HD display. It ran on Qualcomm Snapdragon 665 processor with up to 6GB of RAM and up to 128GB storage.