Palace Intrigue Victims? Before Jitin Prasada, His Father Too Was Disillusioned with Congress & Gandhis 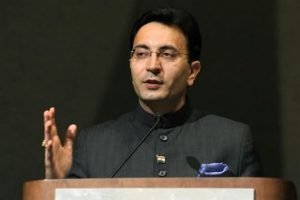 On March 23, 2019, the Congress had survived a scare of losing Jitin Prasada to the BJP.

Even as Jitin Prasada suffered another humiliating defeat in the 2019 Lok Sabha elections, forfeiting deposit from Dhaurahra parliamentary seat, Prasada, a second-generation dynast, remained disillusioned, edgy and rebellious within the Congress till Wednesday afternoon.

Like Jyotiraditya Scindia, who had lost from Guna Lok Sabha seat in 2019, Prasada too, in private, held Rahul Gandhi responsible for his electoral setback. Prasada was among an elite and select band of party leaders—Scindia, Milind Deora and Sachin Pilot were considered integral part of Team Rahul Gandhi when the UPA was in power. Prasada was made Minister of State for Petroleum and Natural Gas and subsequently Human Resource Development. Between 2014 to 2021, he was given several organisational assignments, such as working president UPCC, member of the Congress Working Committee and All India Congress Committee (AICC) in charge of Bengal in the recently concluded state assembly polls. He was also Rahul Gandhi’s point person in several key assignments, including the party’s unsuccessful attempts to keep Jagan Mohan Reddy in the Congress after Y.S. Rajasekhara Reddy’s death in 2009.

Prasada’s list of grudges against Sonia and Rahul Gandhi-led Congress was long. He was a signatory of a G-23 missive that was sent in August 2020, questioning the leadership’s style of functioning. Prasada was reportedly unhappy with Rahul Gandhi’s reluctance or failure to force a ‘generational change’ in the AICC secretariat.

Interestingly, on March 23, 2019, the ‘Brahmin Face’ of the grand old party was reportedly stopped from switching sides by none other than Jyotiraditya Scindia, who has been in the BJP since March 2020. Scindia had reportedly received a SOS from Priyanka Gandhi asking him to prevail upon Prasada. Scindia was then in charge of Uttar Pradesh’s western region. Scindia had got in touch with Prasada literally minutes before the former union minister of state was set to join the BJP. The former maharaja was not only at his persuasive best but promised to look into some of the grievances that Prasada was harbouring then. It was believed that Prasada, the Congress nominee from Dhaurahra Lok Sabha, was upset with the choice of party nominees from neighbouring Sitapur and Lakhimpur Kheri seats where the Congress had fielded Qaiser Jahan and Zafar Ali Naqvi, both belonging to the minority community. When Prasada had protested the presence of two Muslims in the neighbouring constituencies, he was reportedly offered the choice to contest from Lucknow where then Union Home Minister Rajnath Singh was in the fray. The cheeky “offer” had infuriated and antagonised Prasada further.

Now that Prasada is in the BJP, there is a plausible reason for him to recall events that had taken place two decades ago and when he was not in politics. These events are recorded in this author’s two books, “Sonia A Biography” [Penguin] and “24, Akbar Road” [Hachette]. A quick recap for the benefit of readers is given for the sake of accuracy and public interest on what had happened between September 2000 to January 2001 when Prasada’s father Jitendra Prasada was a senior Congress leader.

Jitendra Prasada was Rajiv Gandhi’s political secretary. Post Rajiv Gandhi assassination, Jitty Bhai, as he was popularly addressed in the Congress circles, moved close to P.V. Narasimha Rao and became his confidant from 1991 to 1996. Jitty Bhai’s proximity to Rao was not appreciated by 10, Janpath and its leaders, like Arjun Singh.

When Jitendra Prasada died on January 16, 2001, he was totally disillusioned with the Congress and Gandhis, in particular. Jitendra Prasada had contested against Sonia Gandhi for the Congress president’s post in the organisational polls that took place in November 2000. Few would be aware that Jitty Bhai had, in fact, become a victim of palace intrigue of sorts when he was forced to take on Sonia in the party polls.

Jitendra Prasada had cut his political teeth under Rajiv Gandhi from 1985 to 1989 when he served as the Congress general secretary and Rajiv’s political secretary. Prasada retained the prized post when Rao became all-important between 1991 and 1996. Under Rao, the Brahmin from Uttar Pradesh had his task cut out. He was expected to keep leaders like Arjun Singh, Narain Dutt Tiwari, Mohsina Kidwai and Sheila Dikshit under check. Prasada did that with all the resources at his command, but in the process, the Congress lost its roots in Uttar Pradesh, the state which mattered the most in the country’s politics due to its sheer size and population. Once the Congress lost its control over those 85 parliamentary seats in the 543-member Lok Sabha, it could never get a clear majority to form a government of its own at the national level.

Prasada Sr. had, however, miscalculated the political situation while taking on Sonia Gandhi. Prasada had no illusions about his prospects of defeating Sonia in an election that was tilted heavily in her favour. The entire election machinery was in her hands, including choosing poll observers and returning officers. Prasada believed that Sonia would ask him to withdraw from the fray and reward him with a senior position in the party. Leaders like Natwar Singh and Digvijaya Singh, who were projecting themselves as peacemakers, cemented this line of thinking. But some leaders in the Sonia camp, namely Arjun Singh and Vincent George, had other plans. These leaders argued that the tag of elected party chief would go a long way in consolidating Sonia’s position in the organisation.

Prasada had no option but to take on Sonia. All AICC functionaries were asked to drum up support for Sonia. In Bhopal, Hyderabad, Jaipur and a few other places where Jitty Bhai toured as part of his campaigning, he was greeted with locked doors at the Pradesh Congress Committee (PCC) offices and black flags. A tense Prasada looked for a way out. Meanwhile, the peacemakers shuttled between his house and 10, Janpath, claiming to be working on some formula that was non-existent.

As the date for withdrawal of names drew nearer, Jitty Bhai waited in vain for a call from 10, Janpath offering a face-saving, last-minute withdrawal. Humiliated and marginalized, Jitty Bhai realized that his gambit had failed. Accompanied by a handful of leaders from Uttar Pradesh, Prasada filed his nomination papers and was humbled in the party polls as Sonia Gandhi went on to get nearly 99 per cent of the votes. The peacemakers and many of those who had encouraged Prasada to teach Sonia a lesson were nowhere in sight. Prasada did not recover from the trauma of defeat. A few months later, he suffered a brain haemorrhage and died. The man who knew so much about palace intrigue became one of its worst victims.

The Prasada family had reportedly remained bitter about the events that took place between September 2000 and January 2001 to date.