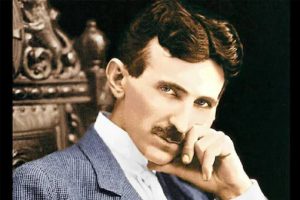 Born on July 10 in 1856, Nikola Tesla was among the greatest inventors and scientists. His ideas were ahead of his time. He is the reason we get electricity in its form today. Tesla is widely known for his extraordinary contributions to the design of the modern alternating current electricity supply system. Tesla was born on this day in 1856 in Smiljan, Austria, which is in modern-day Croatia. He was the fourth child of an orthodox Roman Catholic priest.

He displayed the qualities of an intelligent student during his school days. He could solve the most difficult questions of mathematics. Tesla was very fond of reading books and was well versed in eight languages.

After completing his studies, Tesla worked in many places and devoted his knowledge and expertise towards new inventions. He also worked with scientist Thomas Edison who challenged him to improve the functioning of his generator and motor. Edison allegedly promised to give him several thousand dollars for this. But when Tesla fulfilled this challenge, Edison reneged on his promise which forced Tesla to quit his job from there.

Edison considered direct current (DC) better, which worked on 100 volts of power but was difficult to convert to other voltages. Tesla believed that alternating current (AC) was better because it could be easily carried from one place to another. It was Tesla who perfected the alternating current transmission technology. Today electricity is distributed based on this technology all over the world. Tesla built the first hydroelectric power station using Faraday’s principles.

Tesla was the one who theorised that radio waves could be sent anywhere in the world, which is used today from the internet to space research. He invented the radio coil on which radios, telephones, cell phones, and TVs operate. The foundation of today’s wireless technology was laid by Tesla.

In 1895, Tesla became the first person to build the first hydroelectric power plant at Niagara Falls in Canada. In the year 1900, he was engaged in a very big project. He wanted to create a wireless communication system for the whole world. He also got investors for his project, but after the work started, the investors did not believe in his plan. Tesla had to leave the project due to lack of funds and in 1917 he was declared bankrupt.

He died on 7 January 1943, after which the US Supreme Court cancelled some of the Italian inventor Marconi’s important patents and recognised Tesla’s radio inventions.