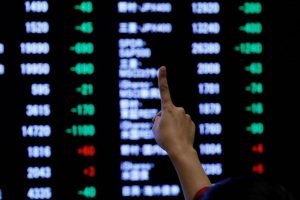 Central Bank of India, Indian Overseas Bank share prices hit fresh 52-week high on BSE in intraday deals amid reports that government might privatise these two lenders. In two days, Central Bank of India stock has surged 42.21 per cent, while IOB stock has soared 43.33 per cent from yesterday’s opening level. The government announced a privatisation plan in the Union Budget for 2021-22 as a part of the broader divestment goals for FY22. The overall disinvestment target for FY22 is set at Rs 1.75 lakh crore. The privatisation news caused a great interest in these stocks with the Central bank of India hitting upper circuit on June 21 and IOB reaching its 52 week high. “The disinvestment policy seems to be fueling the PSU Bank space as of now. Investors must wait for a correction in these stocks and buy on dips as it seems quite overpriced as of now,” Vishal Balabhadruni, Banking Analyst at CapitalVia Global Research, told Financial Express Online.

On Tuesday, Central Bank of India shares jumped 16.5 per cent to Rs 28.30 apiece on BSE. The stock has surpassed its previous 52-week high of Rs 26.40 apiece, touched on February 19, this year. In traded volume terms, 1.11 crore shares exchanged hands on BSE, while a total of 9.01 crore scrips have exchanged hands on NSE so far in the day. Shares of Indian Overseas Bank also surged 18.43 per cent to Rs 27.95 apiece on BSE on the back of heavy volumes. The shares of Chennai-based bank have hit new 52-week high for the second straight day, after it surged 20 per cent in the previous session. So far in intraday, a total of 1.04 crore shares of IOB have traded on BSE, and 7.39 crore units at the NSE.

Nifty PSU Bank index was up 2.5 per cent led by J&K Bank, UCO Bank, Canara Bank, which were up in the range of 1-3 per cent, along with nearly 20 per cent gains in Central Bank of India and Indian Overseas Bank stock prices.

Public sector banks that are the candidates for the government’s disinvestment scheme have been eliciting interest over the past couple of months, said Tanusree Banerjee, Co-Head of Research, Equitymaster. Banerjee told Financial Express Online that the stocks of the Central Bank of India and IOB are expected to see 51 per cent sale in the first phase of disinvestment. “NITI Aayog has reportedly submitted the names of these two banks in a report to the core group of secretaries on disinvestment. While the names are yet to be approved, there is speculation of the valuation upside in the stocks if they are acquired by private sector banking majors,” she added.

Tanusree Banerjee also said that the Insolvency and Bankruptcy Code (IBC) did help public sector banks clean up their books and resolved cases to the tune of Rs 1.9 trillion by September 2020. However, the RBI’s Financial Stability Report points out that bank NPAs could rise to 13.5% by September 2021 due to the impact of the Covid lockdowns.”Most of the incremental NPAs are expected to arise in the books of public sector banks. Therefore, investors need to be careful buying banks with questionable credit quality at elevated valuations,” she added.