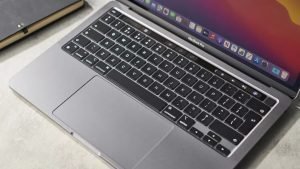 Apple is about to reveal a new MacBook Pro, going by a fresh rumor that follows similar recent chatter from the grapevine – and it could even be built around an M2 chip.

In a research note seen by MacRumors, analyst Katy Huberty of Morgan Stanley asserts that it is ‘likely’ Apple has a new MacBook to show off at WWDC 2021 which kicks off shortly (on June 7).

Check out all the best laptops around
And the best Macs to buy this year
Amazon’s Prime Day 2021 sale is about to happen
Huberty said: “Based on our checks, we believe it’s likely Apple launches a new MacBook featuring in-house designed silicon.”

There are already several rumors flying around indicating the same, with recent speculation coming from another analyst, Wedbush’s Daniel Ives, who said one of the surprises of WWDC would be the revelation of new MacBook Pro 14-inch and MacBook Pro 16-inch models.

Renown Apple leaker Jon Prosser has also added his weight to the rumors claiming there will be a new MacBook Pro unleashed at the start of next week. So the consensus of the speculation seems to be that there will be at least one new laptop coming from Apple, maybe even a pair.

MacRumors further observes that it very recently unearthed what could be battery listings for new MacBook Pro 14-inch and 16-inch models in a Chinese regulatory database.

M2 maybe?
While Huberty didn’t elaborate on what kind of MacBook we might expect to see launched, she’s predicting that the MacBook which should appear may have an M2 chip, or in other words, the sequel to the M1 – whereas Ives reckons Apple will stick with the M1.

The latter seems unlikely, at least going by previous buzz on the rumor mill which is clearly betting on a new chip, although possibly the M1X (another rumor is that the M1X is next in line, with the M2 being reserved for 2022 by Apple).

Huberty further reckons that if the MacBook is M2-powered (or indeed M1X), there’ll be a fair old gap between this initial WWDC unveiling of the machine, and it actually going on sale. The purported MacBook with likely hit shelves in the second half of 2021.

Certainly there are more than a few reports pointing to a second half of 2021 launch for the rumored new MacBook Pro model(s), and indeed we’ve even heard some talk of potential delays related to component shortages (which could even threaten to push the on-sale timeframe to 2022 – a possibility we’ve heard a couple of times now). As ever, employ liberal quantities of condiments with all this.

The revamped MacBook Pro models are expected to run with Mini LED screens – which could be a reason for any potential delay, as we’ve already seen with the iPad Pro 12.9 that uses this tech – and they could well be stunning displays. In other words, any wait might well be worth it…

We’ll soon know the truth behind this, but given the sheer amount of MacBook Pro rumors kicking around, it’s seeming more and more likely that we will see something at WWDC which is literally just around the corner.

Windows 11 May Be Available as a Free Upgrade for Windows 7, Windows 8.1 Users