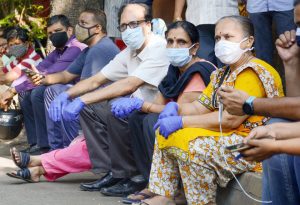 After the country has seen a significant rise in the number of black and white fungus cases, also known as Mucormycosis, a patient has been diagnosed with ‘yellow fungus’ in the nation’s capital region, unconfirmed reports suggest. The first case of yellow fungus was reported in Ghaziabad on Monday, Zee News reported. The patient, currently admitted at ENT surgeon Dr Brij Pal Tyagi’s hospital, showed symptoms of weight loss, low appetite, weight loss and leakage of pus. The ‘yellow fungus’ reportedly affects the healing process of wounds by slowing it down. Like black fungus, it’s also a fatal disease, which ultimately results in sunken eyes and necrosis.

The health ministry has not confirmed the report so far.

Meanwhile, black fungus and white fungus cases are being reported from various parts of the country. Mucormycosis is a fungal infection, which shows in a few COVID-19 patients during or post recovery. In Maharashtra alone, over 2,000 people had already been affected by this fungal infection in the state, of which some patients even lost their eyesight and 10 people succumbed to it.

Black fungus is a complication caused by fungal infection. People catch mucormycosis by coming in contact with the fungal spores in the environment. It can also develop on the skin after the fungus enters the skin through a cut, scrape, burn, or other type of skin trauma.

The disease is being detected among patients who are recovering or have recovered from COVID-19. Moreover, anyone who is diabetic and whose immune system is not functioning well needs to be on the guard against this.

According to the Indian Council of Medical Research advisory, these conditions in COVID-19 patients increase the risk of mucormycosis infection:

What are the common symptoms?

Mucormycosis begins to manifest as skin infection in the air pockets located behind our forehead, nose, cheekbones, and in between the eyes and teeth. It then spreads to eyes, lungs and can even spread to the brain. It leads to blackening or discoloration over the nose, blurred or double vision, chest pain, breathing difficulties and coughing of blood.