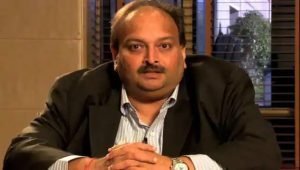 New Delhi: Fugitive diamantaire Mehul Choksi, wanted in a Rs 13,500 crore loan fraud in Punjab National Bank, has gone missing in Antigua and Barbuda where he has been staying since January 2018, his lawyer and the Royal Police Force of the Caribbean island nation said.

The businessman was last seen on Sunday in his car. Police recovered the vehicle after a search but Choksi could not be found, a statement from the Antiguan police said on Monday night India time.

His lawyer Vijay Aggarwal confirmed that Choksi had been missing since Sunday.

“Police in Antigua have started search operations for him. The family is worried about his safety. We are keeping a watch on developments,” Aggarwal told PTI on Tuesday.

The CBI, which is probing allegations against Choksi, is verifying the reports through “formal and informal” channels, including the Interpol that has issued a red corner notice against him on a request from the agency, officials here said.

The statement from the Antiguan police, which launched a missing person operation on Sunday, carries a photograph of the businessman and seeks information from the public.

“The Police are investigating a Missing Person Report made of 62-year-old Mehul Choksi of Jolly Harbour. Mehul was reported missing on Sunday 23rd May 2021 at the Johnson Point Police Station,” it said.

Antiguanewsroom, a local media outlet, quoted Commissioner of Police Atlee Rodney as saying that the police is “following up on the whereabouts of Indian businessman Mehul Choksi”, who is “rumoured” to be missing.

The media reports said Choksi, who had taken citizenship of the island nation, was seen driving in the southern area of the island on Sunday.

While Modi is in a London prison after being repeatedly denied bail and is contesting his extradition to India, Choksi took citizenship of Antigua and Barbuda in 2017 using the Citizenship by Investment programme before fleeing India in the first week of January 2018. The scam came to light subsequently.

Both are facing a CBI probe.