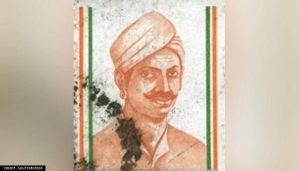 On the occasion of Mangal Pandey Jayanti, India remembers one of the country’s brave soldiers who played a major role in the uprising of the Indian soldiers against the British in 1857. On his 194th birth anniversary, tributes poured in to honour the struggles and sacrifices of the first revolutionary Indian freedom fighter. Many politicians paid homage to Pandey for his important role in the revolt of 1857 against British rule which eventually inspired millions of Indians to fight for freedom against the colonial rule.

Maharashtra’s former Chief Minister, Devendra Fadnavis, has shared his tribute message on Twitter, “Birthday greetings to Mangal Pandey, the great revolutionary, freedom fighter, father of the War of Independence of 1857!”

Former Union Health Minister, Dr Harsh Vardhan also wrote, “The forerunner of the Indian freedom struggle, the immortal sacrificer Shri #MangalPandey Many salutes on the birth anniversary of ji! The sacrifice of Shri Mangal Pandey ji, who presented a challenge in front of the entire British government, a symbol of courage and might, will always inculcate the feeling of patriotism among the countrymen”.

Remembering Mangal Pandey’s freedom struggle
Amar Shaheed Mangal Pandey was born on 19 July 1827 in a Brahmin family at Nagwa in the Ballia district of Uttar Pradesh. During the freedom struggle, Mangal Pandey encouraged Indians for the first time by giving the slogan ‘Maaro Firangi Ko’. His rebellion was the beginning of the first freedom struggle. In 1849, he joined the army of the British East India Company. Some sources suggest that he was recruited by a brigade that marched past him.

Pandey’s attack on British officers on March 29, 1857, was the first major incident that later came to be known as the Indian or Sepoy Mutiny. He was inducted into the 34th Bengal Native Infantry at the Military Cantonment of Barrackpore. He was soldier number 1446 of the infantry.

Mangal Pandey was hanged to death on April 8, 1857. Following this execution, a large-scale revolt broke out in Meerut.

In 1984, a commemorative postage stamp with his image on it was issued by the Indian government. A film in 2005 was made on the life of Mangal Pandey starring Aamir Khan titled Mangal Pandey – The Rising Star.