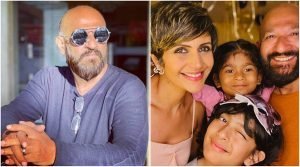 Actor Mandira Bedi’s husband, filmmaker Raj Kaushal, has died at the age of 49. The writer-director-filmmaker passed away on Wednesday morning after a massive heart attack. Actor Rohit Roy confirmed the news to indianexpress.com, “Raj passed away this morning, around 4.30 am, he had a heart attack. He was at home, by the time the family could get any medical help, Raj had gone.” He is survived by wife Mandira and children Vir and Tara.

His funeral took place on Wednesday afternoon at Shivaji Ground in Mumbai. Rohit’s brother, Ronit Roy, and actor Ashish Choudhary were among those who paid their last respects to the filmmaker.

Rohit also posted an emotional note bidding goodbye to the filmmaker. “And just like that, he’s gone, even without saying good bye. Too numb with grief and shock to react. This is not fair, just not fair,” he wrote.

Filmmaker Onir, who collaborated with Raj on My Brother Nikhil, also tweeted, “Gone too soon. We lost Filmmaker and Producer @rajkaushal1 this morning. Very Sad. He was one of the producers of my first film #MyBrotherNikhil. One of those few who believed in our vision and supported us. Prayers for his soul.”

Neha Dhupia, Anupam Kher, Ronnie Screwvala, Sudhir Mishra and others also mourned Raj Kaushal’s death. Neha shared a recent photo from a get-together that featured Raj and Mandira. “Can’t believe you are not with us anymore. Mandira , my strong strong girl, I am at a loss of words. My heart belongs to Vir and Tara. I’m shaken up and in shock and disbelief as I write this,” she tweeted.

Anupam Kher expressed that he is “deeply saddened and shocked to know about the sudden demise of #RajKaushal” He said he has some great memories of working with him.

Ronnie Screwvala wrote, “Deepest condolences @mandybedi for your sudden and deep loss – to lose a life companion is devastating and all our prayers with you and the family.”

“Deeply saddened to hear of @rajkaushal1 passing away. He was among the first directors I worked with in the early years of my career. I will always remember his gentle smile and soft spoken demeanour. A man of great warmth, interesting conversations and a winning personality,” Minissha Lambba’s tweet read.

Kunal Kohli mentioned how the news of Raj Kaushal’s death has shocked him while Vishal Dadlani wrote, “The first person to trust me with making music for a film, @rajkaushal created so many careers with #PyaarMeinKabhiKabhi. Above that, he always stood with his friends.@mandirabedi, I don’t know what to say. Can’t imagine how you and the kids are feeling right now. I’m so sorry.”

Sudhir Mishra said that while he didn’t cross paths with Raj Kaushal, he feels sad for Mandira and their kids. “Didn’t know him but knew many people who knew him well . Once we lived in the same lane ( Sherry Rajan Road , Bandra ) . Funny how our paths never crossed . Really sad . May Mandira and his kids have the strength to bear this loss.”

“My heart goes out to @mandybedi and her two lovely kids. #RIP our happy smiling Raj.. your gentle soul will be missed,” Tisca’s tweet read.

TV and film personality Roshan Abbas wrote, “Heard the terrible news about @rajkaushal1 . May your Jar of Hope always be filled in the afterlife as it was here. I will miss you terribly. Strength to the family and friends.”

Raj is survived by wife Mandira and son Veer and daughter Tara. The writer-director-producer helmed three films in his career – Pyaar Mein Kabhie Kabhie, Shaadi Ka Ladoo and Anthony Kaun Hai. He started his career as a copywriter. In films, he started with assisting Mukul Anand, including Subhash Ghai’s Trimurti.

He started his own advertising production company in 1998 and went on to direct over 800 commercials. Mandira and Raj married in 1999. They welcomed son Vir in 2011 and adopted 4-year-old daughter Tara last year.