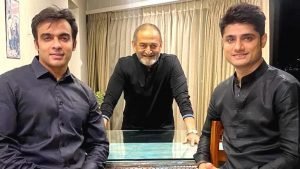 On the 138th birth anniversary of freedom fighter Vinayak Damodar Savarkar, a biopic has been announced. Mahesh Manjrekar will be directing the film based on the life of activist and politician Veer Savarkar. The first poster of the film was released today.

Mahesh Manjrekar will be directing the biopic which has been titled SwatantraVeer Savarkar. Sandeep Singh and Amit B Wadhwani will be co-producing the film. Mahesh Manjrekar is also the co-writer of the film.

Sharing the first poster of the film, Sandeep Singh wrote, “Azaadi ke itihas ki puri baat abhi janna baki hai! Miliye #SwatantraVeerSavarkar se bahut jald…. Veer Savarkar is revered and criticized in equal measure. He has been made into a polarising figure today but I feel that’s because people don’t know enough. No one can deny that he was an important part of our freedom struggle and our attempt is to present a peek into his life and journey (sic).”

WHO IS VEER SAVARKAR?
Vinayak Damodar Savarkar, popularly known as Swatantryaveer Savarkar, was an Indian activist and politician. He was the one to formulate the Hindu nationalist philosophy of Hindutva. He also served as the President of the Hindu Mahasabha. Savarkar endorsed the idea of a Hindu Rashtra (Hindu nation).