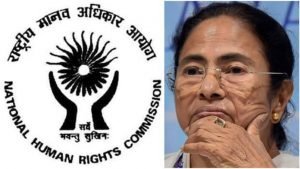 The statutory public body said in its report that, after visiting 311 spots in 20 days and carrying out an extensive inquiry in the matter, the seven-member committee constituted to probe the post-poll violence in West Bengal, concluded that the current situation of the state, is a manifestation of ‘Law of Ruler’, instead of ‘Rule of Law’. It added that the loss of faith in state administration among victims is very evident.

Attaching details of the same, the NHRC report stated that it collected a whopping 1979 number of complaints from 23 districts where incidents of violence had taken place post-Mamata Banerjee’s May 2 win. Most complaints are from Cooch Behar, Birbhum, Bardhaman, North 24 Parganas and Kolkata, said that NHRC report adding that most of the complaints related to rape, molestation and vandalism and were received through local sources in West Bengal while the team was camping there.

The statutory body added that a list of 57 complaints related to women was received from the National Women Commission.

Huge gaps in the cases registered by the WB police and complaints received by the committee: NHRC report on post-poll violence

Stating that the NHRC found huge gaps in the cases registered by the WB police as compared to complaints received by the committee, NHRC said that despite so many sensitive issues of rape and murder registered the percentage of accused arrested and in custody is abysmally low, showing the ineptness of WB Police.

Continuing to castigate the state machinery for its appalling apathy towards the plight of victims, NHRC stated that as of now, the WB police have arrested only around 1300 out of 9300 accused and even out of these 1300, 1086 are already out on bail.

Loss of faith in WB police
“Violence was retributive. It was in retaliation to those who ‘dared’ to vote or support the major opposition party. Victims were helpless and hopeless due to the torture and trauma,” said NHRC, furthering that “to add to the indignity were reports of instances where heads were tonsured or public apologies were made for having “erred” in supporting the major opposition party”.

Drawing attention to the apathy of the state police, NHRC wrote: “Poor and common people have lost faith in Police. Almost all victims informed the Inquiry Committee that Police either did not respond to their phone calls or came and stood as mere spectators while goons went on a rampage from one place to another.”

It said that, in several instances, instead of getting any sort of justice, the poor victims were implicated in false cases by the police. The latter lodged counter cases and pre-dated the counter cases, in order to provide credibility to the version of the accused against the real victim and arrested the victims instead of the accused. It also highlighted that the state police, in its attempt to absolve the TMC goons of the crime and intimidate the accused, filed counter cases against the latter under graver sections of the law than the primary case.

It said that murder cases were registered as Unnatural death cases and pressurised the victims to seek a compromise with the accused.

Post-poll violence hints at an existing politico-bureaucratic-criminal nexus
Besides criticising the state police, another important observation that the NHRC made was that neither senior officials nor political leaders condemned the violence, visited the spots, assuaged the victims or did anything substantive to ameliorate the problems.

Stating that the post-poll violence hints at a dangerous politico-bureaucratic-criminal nexus in the state, NHRC said that the spate of violence also attacked some pillars of democracy, including the rule of law, political pluralism and free, fair and secure polling.

NHRC was vexed that the victims were left on their own to protect themselves against the violation of their human and fundamental rights, including the right to life, liberty, dignified living and health.

It is notable here that the NHRC has also recommended a CBI probe of the post-poll violence cases, adding that the trial of the CBI case should happen outside Bengal.

The High Court made a shocking observation that the West Bengal government has made false statements that there were no complaints about violence after the assembly elections, and those were figments of the imagination of opposition parties. Contrary to the claim that nobody came forward with complaints about violence when an opportunity was given to people to file complaints with the state administration or the NHRC, the authorities were flooded with complaints.

Calcutta HC orders Kolkata police to file FIR against TMC goons based on NHRC interim report
The Court had on July 2, ordered the Kolkata police to file an FIR against those TMC goons who were involved in sectarian and political violence in the state post the electoral victory of TMC. It said that the FIR should be filed based on National Human Rights Commission (NHRC) recommendations.