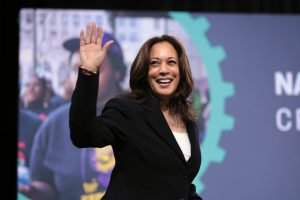 (CNN)Kamala Harris traveled to Guatemala and Mexico seeking a serious strategy for stemming migration from the Northern Triangle, but her efforts were quickly overshadowed by her flippant response about why she has not visited the US-Mexico border as vice president.

Her defensive response to a question that was certain to come up on her first foreign trip since taking office is raising fresh questions about her political agility as she chafes at the efforts by the right to portray her as the administration’s border czar, which is not the assignment that Biden gave her.

In her few short months as vice president, Harris has become a lightning rod for Republicans — a useful foil for the GOP when their attacks on President Joe Biden haven’t landed. Biden cranked up the heat on Harris by handing her a portfolio of immigration issues that is the political equivalent of dynamite at a time when her critics are parsing her every move, often vilifying her in the same way they made Nancy Pelosi and Alexandria Ocasio-Cortez their boogeymen in prior election cycles.
The first foreign trip for any vice president is an acid test, and Harris was under more pressure than most as a potential future leader of the party and the first woman of color to hold the office. Harris spoke at length about the causes of mass migration like crime, corruption and climate change, and announced millions of dollars in aid and investment during her trip. She also issued a stark warning to undocumented migrants not to come to the border.

But her political missteps overshadowed the policy progress on her trip.

The vice president has never been particularly adept when confronted with questions that she doesn’t like or doesn’t want to answer — as she demonstrated during 2020 primaries, when she repeatedly dodged and fumbled questions about her health care plan. In this case, she deflected a straightforward question from NBC’s Lester Holt about why she hasn’t visited the border by laughing it off and stating that she also hasn’t been to Europe, adding that she didn’t understand the point that Holt was making — even though everyone else did.

It was a clumsy answer that came off as tone-deaf given that the situation at the US-Mexico border is one of the most troubling issues facing the administration. Finding a solution for stemming migration from Central America is a problem that has eluded multiple administrations for decades, but even some White House officials — who want her to succeed in this difficult endeavor — were perplexed.

The exchange with Holt reflected the frustration that Harris and her team have felt for weeks as they labor to make it clear that Biden tasked her with handling diplomatic efforts to stem migration from the Northern Triangle, not solving the problem at the US-Mexico border. While it is true that many other government agencies are responsible for handling the border, that stance has been a difficult needle for her to thread, given that anyone with experience in the region will tell you that the two issues are inextricably entwined.

During a news conference in Mexico, Harris clarified her comments by committing to visiting the border, which would have been a simple way to settle the issue the first time she was asked.

Her shaky handling of the politics around the immigration issue drew new questions about her political dexterity both as vice president and as a future aspirant for the White House, because the trip this week was her first test at the highest levels of statecraft.

The right-wing media is trying to portray Harris as hopelessly inept when it comes to matters at the border — and she gave them an opening by appearing to try to distance herself from the problems there. The awkwardness of her answer to Holt came to dominate the storyline about her trip, leading to questions about her preparedness and sexist critiques of her readiness to take on these challenges. It also overshadowed her substantive answers about policy in the Northern Triangle and the intensive, hands-on efforts that she is making to dig deeply into the subject as she tries to shape the strategy for the region.

Sen. Ted Cruz of Texas and others GOP leaders — many of whom have taken high-profile trips to the border without managing to solve the problem — pounced on what they perceived as a gaffe: “Kamala Harris hasn’t been to Europe, she hasn’t been to Australia but we don’t have an Australian border crisis or a European border crisis,” Cruz tweeted. “We have a crisis on the southern border. She should come to Texas and see the crisis firsthand. #BidenBorderCrisis.”

House Minority Leader Kevin McCarthy, a California Republican, piled on by tweeting that “the only thing Vice President Kamala Harris managed to achieve in the last 3 days was avoid actually dealing with the worsening crisis at America’s border.”
It is clear that some of the criticism of Harris, especially in conservative media, is more acute because she is the first Black, female vice president. For example, Fox News commentator Katie Pavlich claimed Tuesday that Harris was chosen by Biden “based on gender and skin color rather than actual talent and expertise” — an offensive comment that overlooks the record and achievements of the former prosecutor who served as California attorney general and a US senator.

But success in politics hinges on the ability to be nimble both at home and on the world stage, to understand how to deflect criticism or unwelcome questions in a way that turns them to one’s advantage. Harris has always struggled in that regard — even from her early days in California politics — and she knows she is facing greater scrutiny now because Biden said he was running as a “transitional figure” and then tapped her to be the last person in the room whenever he was making important decisions.
Precisely because she is being viewed as Biden’s potential heir and a possible future Democratic nominee, she will face a relentless, years-long campaign by the right to discredit her. That means the spotlight on her will always be bright, and she will need a political operation that is always ready to react. The poor reviews of this first trip recalled some of the missteps of a 2020 campaign for the White House that did not live up to its early promise and whether she has learned from them.
She has taken on two major assignments from Biden — both halting migration from the Northern Triangle and the assault on voting rights — that are among the thorniest issues facing the administration. Her first foray abroad raised questions of preparation and whether Harris has the kind of robust political team that vice presidents need — especially those who are relative novices on the world stage and are quite new to the constant scrutiny of top-line politics.

For someone seen as potentially the first female president, who is a heartbeat away from the top job already, these issues are especially important. It will take time for Harris to develop the policy assurance and capacity to swat away pesky press questions — demonstrated, for example, by Hillary Clinton during her tenure as secretary of state. Clinton, who was less gifted than Harris at retail politics, nevertheless had the ability of the most accomplished global politicians of thinking several sentences ahead while sparring with the press or a foreign official — a skill Harris has yet to master.

While it is not Harris’ fault that immigration is an intractable issue that has defied presidents for decades, the notion that her staff has repeatedly advanced that her portfolio extends only to the international, diplomatic aspects of the problem is disingenuous.
It’s easy to see why her aides might see the border issues as a poisoned political chalice. But presidents, and by extension vice presidents, don’t get to pick and choose areas of responsibility to suit them. The White House gets saddled with every problem that no one else can solve.
Still, none of the damage that occurred to Harris on her trip is irreparable. And if the question is gaffes on a foreign trip, her wobbles pale in comparison with the behavior of former President Donald Trump, whose travel was an endless parade of insults to US friends and affronts to democratic values. Trump, for instance, used a summit in Helsinki with Russian President Vladimir Putin to trash US intelligence agencies on live television as he stood by the side of the former KGB officer who had interfered in a US election to help him. And he palled around with one of the world’s most cruel dictators, Kim Jong Un of North Korea.
It’s safe to say that Harris would never replicate that conduct. And though this first trip was a rocky one, she has plenty of time left to prove herself.