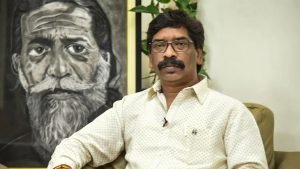 The Jharkhand government on Wednesday extended Covid-related lockdown-like restrictions till June 17 with some relaxations, including expanding time of opening of shops across the state by two hours till 4 pm, an official said.

Inter-state and Intra-state bus transport shall be prohibited except for the buses specifically used by the district administration till June 17 morning, as per the notification in this regard.

Earlier, an official had said that the restrictions are applicable till June 16, but the government notification stated that the curbs will be in placer till June 17.

But, religious places will remain closed for the devotees like earlier and so is the educational institutions.

This is the fifth time that the curbs, first imposed in the state on April 22 for a week, were extended.

The ongoing measures were scheduled to end on June 10.

The decision was made at a meeting of the state disaster management authority chaired by chief minister Hemant Soren.

“The Health Safety Week now stands extended till June 17. Some relaxations have been given, including the opening of shops in all 24 districts from 6 am to 4 pm,” the order said.

A tweet from the chief minister said that In Jamshedpur having more caseload, shops dealing in shoes, cloths, cosmetics and jewellery will remain shut during the period.

However, all shops in the state including shops selling fruits, vegetables, grocery items, sweets and eatables shall remain closed from Saturday 4 pm to Monday 6 pm barring medicines shops, hospitals and petrol pumps etc.

The government has allowed opening of all government and private offices till 4 pm with one-third of human resources.

Home delivery of food from restaurants along with take away has been allowed, the order said adding that the shopping malls, cinema halls, clubs, bars, banquet halls, multiplexes and department stores will remain closed. At the same time stadiums, gymnasiums, swimming pools and parks will remain closed in addition to all educational institutions.

The government said anganwadi centres will remain shut but food items will be provided to the beneficiaries at home.

All examinations to be conducted by the state will remain postponed while the ban on fair and exhibition will continue.

“Wearing of mask in public place and maintaining social distance are mandatory,” the statement said adding in case of violation of order, action will be taken by registering an FIR under the relevant section of the Disaster Management Act.

Jharkhand reported 603 new Covid-19 cases on Wednesday and 13 more deaths. There are 5,099 active cases in the state at present.

Milkha Singh no more; passes away aged 91 due to COVID-19 complications