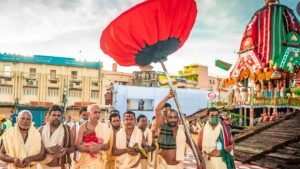 The festival of Jagannath Puri Rath Yatra in the temple town of Puri, Odisha began today (July 12) and celebrations are in full swing. However, due to the COVID outbreak in the second wave and the possibility of a third wave, the celebrations will not be as grand as they used to be. According to an ANI report, the Rath Yatra will be held without devotees as only servitors with a negative COVID test report will be allowed to take part in the pulling of chariots.

As per updates on Shree Jagannath Temple in Puri, Odisha, the celebrations began with routine rituals of the deities such as ‘Mangala Aarti’, ‘Mailam’, ‘Abakasha’, ‘Surya Puja’, ‘Dwarapala Puja’, ‘Rosa homa’, ‘Gopalaballava dhupa’, ‘Sakala Dhupa’(Khechudi bhoga). All of them had taken place early in the morning.

Rath Yatra is a festival associated with Lord Jagannath held at Puri annually in the state of Odisha. Also known as the chariot festival, this year marks the 144th Rath Yatra of the Lord. Ratha Yatra commemorates Lord Jagannatha’s annual visit to Gundicha Mata temple.

It is believed that in order to pay their respects to Queen Gundicha, wife of the legendary King Indradyumna, who built the Puri Jagannatha temple, Lord Jagannatha along with brother Balabhadra and sister Subhadra leave their regular abode from the main temple and spend some time in this temple built by Gundicha in their honour.