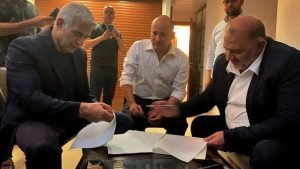 Israel’s opposition leader on Thursday moved closer to unseating Prime Minister Benjamin Netanyahu after reaching an agreement with a coalition of diverse political allies to form a new government.

But the fragile alliance, which would command a thin majority in parliament, was expected to be sworn in only in about 10-12 days, leaving slight room for Netanyahu, Israel’s longest-serving leader, to try to turn lawmakers against it.

About 35 minutes before a Wednesday midnight deadline, centrist politician Yair Lapid told President Reuven Rivlin in an email: “I am honoured to inform you that I have succeeded in forming a government.”

Under the coalition pact, nationalist Naftali Bennett, 49, a former defence minister and a high-tech millionaire, would become prime minister and hand over the post to Lapid, 57, a former TV host and finance minister, in about two years.

The agreement capped a March 23 election in which neither Netanyahu’s right-wing Likud party and its allies nor their opponents won a majority in the legislature. It was Israel’s fourth national ballot in two years.

The coalition comprises a patchwork of small and medium parties from across the political spectrum, including for the first time in Israel’s history one that represents its 21% Arab minority – the United Arab List.

They have little in common other than a desire to oust Netanyahu, whose 12-year run as prime minister has been clouded by a trial on corruption charges that he denies.

Political analysts widely expected Netanyahu to try to pick off what one described as “low-hanging fruit”, seizing upon Yamina members who are unhappy about joining forces with Arab and leftist lawmakers.

Tamar Zandberg, a Meretz legislator, acknowledged the difficulties in getting the alliance that her party joined off the ground.

“The coalition’s test…is to be sworn in – that won’t be without rough patches and problems,” she said on Army Radio on Thursday.

Netanyahu, who has yet to respond to Lapid’s announcement, controls 30 seats in the 120-member Knesset, almost twice as many as Lapid’s Yesh Atid party, and he is allied with at least three other religious and nationalist parties.

A source involved in the coalition talks said the proposed new government would try to retain consensus by avoiding hot-button ideological issues such as whether to annex or cede occupied West Bank territory that Palestinians want for a state.

Bennet has said that the creation of an independent Palestine would be suicide for Israel. He made annexation of parts of territory that Israel captured in the 1967 Middle East war a major feature of his political platform but following through on that with the broad new coalition looked to be politically unfeasible.

But any new flareup along Israel’s volatile border with Gaza, nearly two weeks after a ceasefire ended 11 days of fighting with the Palestinian enclave’s ruling Hamas group, could challenge the stability of the broad alliance.

During his tenure as prime minister, Netanyahu has been an often polarising figure at home and abroad.

He has said a Bennett-Lapid coalition would endanger Israel’s security – an allusion to efforts to curb Iran’s nuclear programme and managing the Palestinian issue.

Lapid, a centrist who campaigned under a pledge to “return sanity” to Israel, was given the task of forming a government after Netanyahu failed to do so in the wake of the March election.

Netanyahu’s rivals have cited the criminal charges against him as a main reason why Israel needs a new leader, arguing that he might use a new term to legislate immunity to shield himself.

“This government…will respect its opponents and do all it can to unites and connect all parts of Israeli society,” Lapid said on Twitter.

The new government, if it is sworn in, will face considerable challenges. As well as Iran and the moribund peace process with the Palestinians, it also faces a war crimes probe by the International Criminal Court and economic recovery following the coronavirus pandemic.