‘Is your father a mali or chowkidar? I will cancel your license, H*r*m*zade’: Maneka Gandhi threatens vets in viral audios 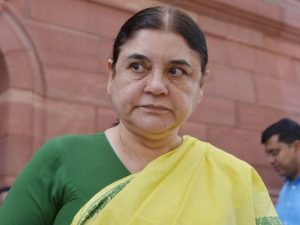 BJP Minister Maneka Gandhi has been in the news lately for all the wrong reasons. After her alleged audio abusing a businessman went viral on social media in January, yet another call recording of her using expletives against a veterinarian is doing the rounds on social media.

It is notable here that Maneka Gandhi is a BJP MP from the Sultanpur Constituency. She was minister of women and child welfare in the former Modi government from 2014 to 2019.

In the audio file that is going viral on social media, the voice of a lady, allegedly that of Maneka Gandhi, can be heard using foul language with extremely rude mannerisms while speaking with a veterinarian doctor who had treated a dog. The dog allegedly could not recover well. Threatening to cancel his veterinary license, Gandhi called the doctor ‘Haramzaade’, “Harami’, ‘Haramkhor’ and ‘Chutiya.’

Gandhi was allegedly upset over the dog’s amputation surgery going wrong. Without giving the doctor a chance to speak, she called him illiterate. However, the doctor on call did inform that the owner insisted on taking the dog back after amputation surgery. He said that they had advised the owner to be cautious as the dog might try to tear open the stitches.

The doctor alleged that the owner agreed to be careful, but got the dog back the next day with torn stitches. Gandhi who seemed not to be in the mood to hear the doctor’s side of the story, belittled his family and even attacked his caste.

“What is your full name?” asked Gandhi. “Vikas Sharma,” the doctor replied. “You do not use your full name because you are a blot on your family,” exclaimed Gandhi.

Calling him a ‘jholachaap’, Gandhi was heard even dragging the vet’s family into her abusive rant. “Tumhara baap kya karta hai? Koi maali hai chowkidar hai kya hai? (What does your father do? Is he a gardener or a watchman?),” asked Gandhi.

She also threatened the doctor of snatching his license if the dog dies and asked him to treat the dog again at his own expense.

Calling June 23 as a ‘Black Day’, the Indian Veterinary Association in a letter have condemned the unruly behavior and unparliamentary language used by Maneka Gandhi against doctors.

In the letter, the association also emphasized on Gandhi’s demand for compensation.

Condemning such vile and abusive behaviour coming from a parliamentarian, the association has asserted that the PM and the speaker of Lok Sabha have been apprised of Maneka’s Gandhi’s behaviour and threats.

Students of Banaras Hindu University have also staged a protest in the college demanding an apology from the minister.

In another call recording, Gandhi can be heard accusing a senior doctor of ‘killing’ a dog. The doctor who seems to be known to Gandhi explains that the said dog was severely sick, and it was euthanized as per the owner’s request.

However, Gandhi continues to accuse him of killing and hounds him for an answer. When the doctor refused to reply to her derogatory questions citing he is not answerable to her in any way, Gandhi once again threatens to cancel his license.

The doctor who has been in practice for 25 years suggested she can do what she deems right since she is a minister in power. Irked by the comment, Gandhi calls his profession a ‘dhanda.’

Maneka Gandhi heard abusing a businessman
An alleged conversation between BJP leader Maneka Gandhi and a businessman called Ramalingam had gone viral in January on the internet where the former can be heard saying that she will get the latter booked in a sexual harassment case. The conversation is reported to have occurred after Ramalingam allegedly hit a dog with a bat.

During the conversation, Maneka Gandhi can be allegedly heard calling the man ‘Goonda’, ‘scoundrel’ and accused him of harassing one Malati Shah and Nitin. The BJP leader tells Ramalingam, “You will not harass…I will put sexual harassment case against you. You are harassing Malati Shah, You are harassing Nitin. You are going place to place talking nonsense. You are known as local goonda. You are jobless. Trying to get into politics, harass people through that. Do you understand?”

Gandhi who claims to be a dog lover has often been heard making obnoxious remarks and accusing people of wrong-doings without listening to their side of the story.