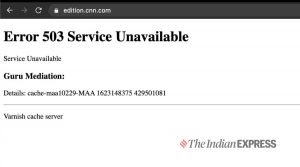 Leading websites operated by news outlets including the Financial Times, the Guardian, the New York Times, CNN were down. Quora was also down for users in India, though it appears to be back now. Other sites impacted were Stack Overflow, GitHub, gov.uk, Hulu, HBO Max, Quora, PayPal, Vimeo and Shopify, according to Engadget.

In a detailed thread on Twitter, the Guardian’s UK technology correspondent Alex Hern wrote that the “massive internet outage” has been traced to a failure in a content delivery network (CDN) run by Fastly.”

His thread also notes that the the outage, which began shortly before 11am UK time, saw visitors to a vast array of sites receive error messages including “Error 503 Service Unavailable” and a terse “connection failure”. When we tried accessing CNN, we also get the 503 error.

According to Hern’s thread the problem can be traced to Fastly, which is a cloud computing services provider, and runs an “edge cloud that is supposed to speed up loading times for websites, protect them from denial-of-service attacks, and help them deal with bursts of traffic.”

On its status page, Fastly says the issue has been identified and a fix has been implemented. It adds that customers may experience increased origin load as global services return. The status page noted nearly an hour back that they are “currently investigating potential impact to performance with our CDN services.”