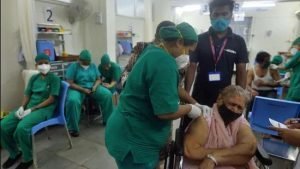 India on Monday administered close to 8.6 million vaccine doses against coronavirus disease (Covid-19) in a single day, which is the highest ever single-day number recorded in the world so far, said the Union health ministry in a statement.

The revised universal Covid-19 immunisation policy kicked in on June 1, wherein the Centre is procuring and supplying 75% of the total vaccine supplies being produced in India for free to states for immunising all adults. The Centre then launched the universal vaccination programme against Covid-19 from Monday to provide states with free vaccines for the 18-45 category, a move that is expected to help scale up daily vaccination numbers.

In all, close to 300 million vaccine doses have been administered across the country since the national Covid-19 immunisation drive began in the country on January 16, 2021.

“This was a huge number for a single day, and even though this may not be possible to sustain daily in June because of the limited vaccine supplies, it looks likes about 5 million vaccine doses should be administered in a day,” said a senior government official aware of the developments, on condition of anonymity.

Dr NK Arora, chairman, working group on Covid-19 vaccines, said that India should be capable of administering close to 10 million shots in a day by August, with vaccine supplies expected to improve in coming weeks.

The government is expecting to get around 200-250 million doses per month by August as vaccine manufactures such as Serum Institute of India and Bharat Biotech are in the process of scaling up their vaccine production capacity.

India’s vaccine drive began for healthcare workers, and was later expanded to include all frontline workers on February 2, and then, everyone over the age of 60 years and people over the age of 45 with co-morbidities, on March 1.

On April 1, it was expanded to include everyone over the age of 45. Then, in response to demand from states and people, the drive was opened up further, to everyone over the age of 18 years, although states were told they would have to pay for the vaccines of those between the ages of 18 and 45. Private hospitals were also allowed to offer vaccinations at capped prices.