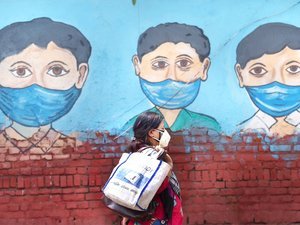 A case green fungus (Aspergillosis) infection case of a 34-year old recovered Covid patient has been reported in Madhya Pradesh. While this is the state’s first such case, the medical community is unsure about other parts of India.

The man had been treated for almost 100 per cent coronavirus infection in the lungs, about a month ago. He had recovered, but then began having nose bleeds and high fever, and weaked considerably owing to weight loss, news agency PTI reported.

Subsequently, green fungus infection was found in the patients sinuses, lungs and blood. His lungs were found to be 90 per cent infected.

So far, India has reported cases of black, white and yellow fungus from different regions, but not that of green fungus before yesterday.

Experts, however, are not unanimous on fungus colour coding. “There is no colour coding of fungal infection. The only thing is that it is aspergillus fungus and mucormycosis,” says a doctor.

Fungal infections don’t lead to changed colour of the body; the naming of a virus in such a manner is done because the colour is seen in lab culture during testing, says another doctor.

Fungus exhibits colour in their culture. All of them — black, yellow, green and white fungus — are basically specimens of cinderella, mucormycosis and aspergillus.