Former UP CM Kalyan Singh admitted to ICU in Lucknow 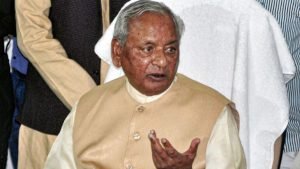 Former Uttar Pradesh chief minister Kalyan Singh was admitted to the intensive care unit (ICU) of the Sanjay Gandhi Post Graduate Institute of Medical Sciences (SGPGI) in Lucknow on Sunday evening, according to a statement released by the institute.

The statement said that a panel of experts, from the nephrology, cardiology, neurology, endocrinology and neuro-otology departments, has been formed to attend to veteran BJP leader Kalyan Singh.

Kalyan Singh was admitted to Lucknow’s Ram Manohar Lohia Institute on Saturday after his health deteriorated. He had been unwell for the past two weeks.

According to reports, Kalyan Singh complained of body swelling. His urea and creatinine levels were also reported to be elevated as per the blood tests.

Singh, who is also a former governor of Rajasthan, was admitted to the ICU of SGPI on Sunday around 5.30 pm.

The most recent statement from the institute read, “On his arrival here, his blood pressure and heartbeats were found normal, but the level of consciousness was a bit low. Keeping in mind his earlier ailments, he has been admitted to the ICU of the CCM.”

Veteran BJP leader Kalyan Singh has served both as chief minister of Uttar Pradesh and governor of Rajasthan.