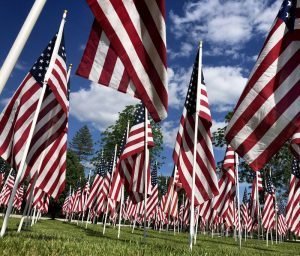 What is “Flag Day?” Why do we celebrate it?
Flag Day is a celebration of the American flag that occurs every year on June 14, in remembrance of when our country’s first American flag was introduced by the Continental Congress as the official American flag on June 14, 1777.

The Continental Congress introduced the American flag in the middle of the Revolutionary War at a time when each colony or special interest had its own flag. The Declaration of Independence made the introduction of a universal American flag necessary.

Congress made a resolution on June 14, 1777, outlining the purpose for a united American flag for the 13 colonies: “The flag of the United States shall be thirteen stripes, alternate red and white, with a union of thirteen stars of white on a blue field …”

In 1885, a school teacher by the name of Bernard J. Cigrand encouraged his students to reflect on the symbolism behind the American flag.

Eventually, he came up with a proposal to establish an annual observance for the nation’s flag and penned an article called the “Fourteenth of June” in the Chicago Argus newspaper. To this day, he is regarded as the “Father of Flag Day.”

How is Flag Day celebrated today?
On May 30, 1916, President Woodrow Wilson established a national Flag Day on June 14. President Harry Truman signed legislation in 1949 proclaiming Flag Day as a national holiday, although it was never considered an official federal holiday.

Many Americans celebrate Flag Day by displaying the red, white, and blue flags with 50 stars and 13 stripes in front of homes and businesses.

Some towns and cities hold parades and other events to celebrate the flag, and the American flag is flown at all government buildings.

Is Flag Day an official holiday? Will government offices and businesses be open?
Flag Day is not an official federal holiday, but its observance is proclaimed every year by the president of the United States.

Businesses and government offices will remain open in New Jersey and across the country. Schools and the U.S. Postal Service will also remain open and mail service will resume as usual.

Why was Flag Day never a holiday?
Flag Day was not included in the 1968 Uniform Holiday Act, which was legislation which laid out the framework for the 11 official federal holidays and three-day weekend holidays we currently celebrate.