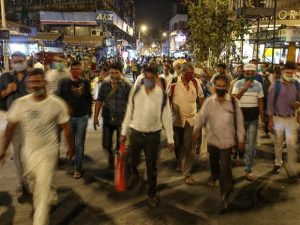 India is preparing a stimulus package for sectors worst affected by a deadly coronavirus wave, aiming to support an economy struggling with a slew of localized lockdowns, people familiar with the matter said.

The finance ministry is working on proposals to bolster the tourism, aviation and hospitality industries, along with small and medium-sized companies, the people said, asking not to be identified as the deliberations are private. The discussions are at an early stage and no timeline for an announcement has been decided, they said. A finance ministry spokesman declined to comment.

The latest wave of Covid-19 infections has made India the global hotspot for the pandemic and has decimated travel since the second wave picked up in March even though Prime Minister Narendra Modi has refused to implement a strict nationwide lockdown. With nearly 200,000 daily cases daily many local governments, including India’s most industrialized states — have imposed curbs against the spread of the virus.

That’s prompted many economists to cut their forecasts for the financial year that began April 1, as rising unemployment and dwindling savings among consumers dim the chances for double-digit growth. While the International Monetary Fund expects India’s economy to expand 12.5% this year to March — and will be revisiting the forecast in July — the country’s central bank projects 10.5% growth.

Modi’s administration doesn’t have enough fiscal room to maneuver even though it received about $14 billion from the Reserve Bank of India as dividend.

That will mean, stimulus will most likely be in the form of tax breaks, according to Teresa John, economist at Nirmal Bang Equities Pvt.

“The government doesn’t have too much leeway, although the recent RBI dividend provides some cushion,” said John. “The stimulus may be mostly additional guarantees and tax concessions, maybe demand boosting measures once opening up starts. All these may not involve a large government spending.”

Flagging growth prospects put the onus on policy makers to support activity, especially once the virus caseload eases. Finance Minister Nirmala Sitharaman, who said last month she’s monitoring the economy in a “very detailed fashion,” has held discussions with economists in recent days about a stimulus package, the people said.

“We expect the government to stick to its overall budgeted spending, while shifting its expenditure composition more in favor of health services and food subsidies,” said Bloomberg Economics’ Abhishek Gupta.

The proposals are being drawn up at time when the rupee has emerged as Asia’s top-performing currency from its worst on signs that India’s virus crisis may be easing after infection numbers hit a record 414,118 on May 7 due to localized lockdowns. India’s stock benchmark is also approaching a record-high close reached in February.

In April, the finance ministry eased rules for capital expenditure by government departments to try to boost spending in the economy. It also decided to allocate five kilograms of free food to the poor per month as the lockdowns saw millions of migrant laborers flee urban areas and back to their rural homes.

But Sitharaman’s hands are restrained given India aims to lower its budget gap to 6.8% of gross domestic product in the financial year to March 2022, from an estimated 9.5% last year, signaling little legroom for New Delhi to ease purse strings in a significant manner.

Pressure also is building on the central bank — which serves as the banking sector regulator — to ease loan repayment rules, especially for sectors badly hit by this virus wave.