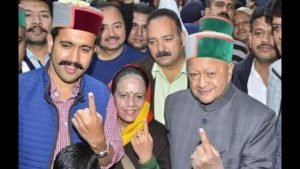 Former Himachal Pradesh chief minister and veteran Congress leader Virbhadra Singh, who was hospitalised at Indira Gandhi Medical College (IGMC), Shimla, passed away after a cardiac arrest around 3.30am on Thursday. He was 87.

“He passed away this morning and his family members were beside him,” said IGMC senior medical superintendent Dr Janakraj Pakhretia.

Virbhadra Singh was shifted to the intensive care unit (ICU) of IGMC and was put on ventilator support on Monday night after he suffered a heart attack. He was undergoing treatment in the cardiology department since April 23.

On April 13, he had tested positive for Covid-19 and was taken to Max Hospital in Mohali. He was discharged after treatment on April 23 but on his arrival in Shimla, he developed breathing difficulty and was admitted to IGMC.

Virbhadra Singh, a nine-time MLA and five-time member of Parliament, was Himachal Pradesh’s chief minister for six terms since 1983. Singh also remained the leader of Opposition from March 1998 to March 2003.

He represented Arki constituency in Solan district in the present state assembly.

His wife Pratibha Singh and son Vikramaditya Singh are also politicians. Pratibha is a former MP from Mandi, while Vikramaditya is the sitting MLA from Shimla Rural.