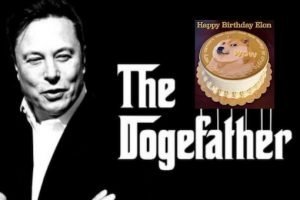 Tesla, SpaceX CEO Elon Musk who has dank memes for breakfast and AI for dinner turned half a century old on Monday. The tech billionaire ranks high in the world’s richest person chart and has become a staple on the microblogging site Twitter where users follow him for his passion for bizarre memes, rocket launches, Mars exploration plans, and everything in between. But perhaps it’s his consistent push for cryptocurrencies that has earned him the unanimous tag of “Musk effect”- wherein just a single tweet by him results in soaring or crashing of markets. Such is his impact, netizens recently wished Musk on Father’s Day, calling him the “Dogefather” of the crypto world.

Come Monday, netizens once again trended ‘Dogefather’ on Twitter, this time to wish him a happy 50th birthday with the memes.

WHY DOGEFATHER?
Dogecoin started as a joke. In 2021, however, the joke appeared to have turned on those who didn’t take the meme cryptocurrency seriously. The meme-cryptocurrency Elon Musk wouldn’t stop tweeting about reached an all-time high in mid-April, crossing 10 cents for the first time. The market cap of DogeCoin — literally classified as “a meme coin” — is currently $33,201,531,171. In early January, each token was worth less than one cent.

Currently, the price of Dogecoin is $0.2536. Its rise can be largely credited to the Tesla CEO and SpaceX boss, Musk, who with some strange agenda has been rallying support for the cryptocurrency.