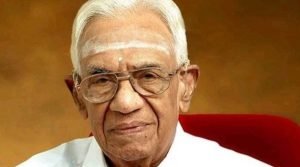 Dr PK Warrier, a flag-bearer of Ayurveda who played a critical role in popularising Kerala’s traditional mode of treatment across the world, passed away at the age of 100 at his home in Kottakkal. He was the chief physician and managing trustee of the Kottakkal Arya Vaidya Sala, one of the leading Ayurvedic healthcare chains in the country.

In June, Chief Minister Pinarayi Vijayan had inaugurated through Zoom the centenary birthday celebrations of Dr Warrier, saying very few in the world would be as blessed as him. “It is a celebration of not only Arya Vaidya Sala, but of everyone who loves Ayurveda,” he had said on the occasion.

On Saturday, following Dr Warrier’s demise, the CM wrote on Facebook, “He blended humanity with medical science. With the thought that money should not be a hindrance for treatment, he brought the principles of Ayurveda to the grassroot levels in society. From heads of nations to the orphaned and abandoned, people approached him for treatment. With the help of the medical community, he gave them treatment and compassion.”

“His hallmark was his secular and progressive perspectives. He valued personal bonds and relationships,” he wrote.

Dr Warrier, who took over the mantle of leadership at Kottakkal in the 50s, is considered a doyen of modern Ayurveda as a result of his extensive contributions to making the practice accessible to the larger public and his research in drug standardisation and development. He co-authored a five-volume treatise on 500 species of Indian medical plants and has published many research papers in the fields of Ayurveda and ethnopharmacology.

He won the Kerala Sahitya Akademi award for biography and autobiography in 2008 for his work ‘Smriti Parvam’. He was a recipient of the Padma Shri in 1999 and the Padma Bhushan in 2010. His wife was late Madhavikutty K Warrier, a poet.

Dr Warrier’s mortal remains have been kept at the Kailasa Mandiram in Kottakkal for the public to pay homage. He will be cremated Saturday evening at the family crematorium in Kottakkal.