Despite the nearly 6% rally, this is only the fourth best week for Reliance Industries’ shares this year 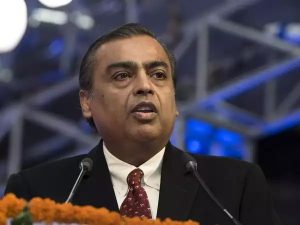 Mukesh Ambani’s promise of transforming Reliance Industries (RIL) from an energy giant to a technology-driven consumer enterprise had the street eating out of his hands last year. The excitement sobered down along with the lull, post the flurry of investments.

However, the shares of RIL are getting hot again as some of the promises move closer to reality. The nearly 6% intraday rally in the shares of India’s biggest conglomerate, which has interests in everything from oil and gas to telecom to retail, is the most significant move in the stock in the last 2 months.

The surge in RIL shares has been so strong that it accounts for nearly all the gains on the benchmark index, Nifty, as of 1 pm (May 28). Compared to the last week, it is up by over 2%. In comparison, RIL is up by 5.7%.

However, investors will do well to remember that this is still within the range of ₹1,900 to ₹2,200 that RIL has shuttled between since November last year.

A Bank of America Global Securities report dated May 19, 2021 suggests that RIL is in the driver’s seat when it comes to telecom, retail and digital fronts. “Overall, we find RIL well placed in its consumer business: telco, retail & digital to benefit in coming years as it gains traction with improving scale,” the report stated.

This is the fourth time the stock of Reliance has seen a weekly gain of over 4% this year.

Google to partner with Reliance Jio for low-cost smartphones
One of the triggers behind the massive surge in RIL’s share price could be news of the partnership with tech giant Google for a low-cost Jio smartphone.

According to a PTI report, Google Chief Executive Officer (CEO) Sundar Pichai said that they have started working on the low-cost Jio smartphone.

In July last year, Google picked up a 7.7% stake in Jio Platforms for ₹33,737 crore. The two have come together for Jio’s “2G-mukt Bharat” (2G-free India) initiative, wherein Google will help Jio build a low-cost smartphone, presumably based on either Android or Kai operating system

Jio Platforms, Infibeam apply for NUE licence
Reliance’s digital services arm Jio Platforms and Infibeam have signed an agreement and applied for a New Umbrella Entity (NUE) licence, according to the latter.

If approved, this would allow Jio and Infibeam to roll out a payments platform. This platform would be a for-profit one, and allows the licence holder to charge for transactions.

Another possible contributor to RIL rally
Balaji Telefilms, a quarter of which is owned by Ambani’s Reliance, has also gained over 20% since May 19.