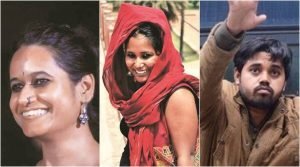 Ending the year-long detention of the three student activists booked by Delhi Police under the UAPA anti-terror law, the Delhi High Court Tuesday said that “it seems, that in its anxiety to suppress dissent, in the mind of the State, the line between the constitutionally guaranteed right to protest and terrorist activity seems to be getting somewhat blurred. If this mindset gains traction, it would be a sad day for democracy”.

Natasha Narwal, Devangana Kalita and Asif Iqbal Tanha were arrested in May 2020 for their alleged role in the Northeast Delhi riots conspiracy case and were later booked under the UAPA. While JNU students Narwal and Kalita are in Tihar Jail, Tanha, a Jamia Millia Islamia student, is out on a two-week interim custody bail to take his examinations.

The bench said that the allegations against the accused do not prima facie disclose the commission of any offence under UAPA section 15 (terrorist act), section 17 (punishment for raising funds for terrorist act) and section 18 (punishment for conspiracy) of the UAPA. And therefore, the additional conditions, limitations and restrictions on grant of bail under section 43 D (5) of UAPA do not apply.

All three accused have been directed to furnish a personal bond of Rs 50,000 each with two sureties of like amount. They have been directed not to leave the country, share their mobile number with the local SHO, and not contact prosecution witnesses or tamper with evidence.