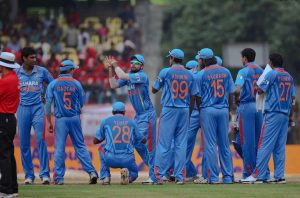 MUMBAI: This year’s Twenty20 World Cup is set to be shifted to the United Arab Emirates due to the COVID-19 situation in India, Indian cricket board sources told Reuters on Saturday.

Infections have rocketed again in another wave this year as the country scrambles to curb a more transmissible variant of the virus, hitting plans to ease lockdown measures.

The Board of Control for Cricket in India (BCCI), the local organisers for the 16-team tournament, was forced to suspend the Indian Premier League in May as cases surged in the country.

The remaining matches of the world’s richest T20 league were moved to the UAE, where it was also held last year, and will be completed ahead of the World Cup, which is scheduled to start from mid-October.

“Even if we go ahead and host the World Cup in the safest possible manner, some countries might ban travel to India in view of the third wave (of coronavirus infections). That makes the whole thing untenable,” a board source, who did not want to be identified, told Reuters.

“A decision will be taken in the next couple of days and will be conveyed to the International Cricket Council.”

Sourav Ganguly, the BCCI chief and former India captain, told Reuters in a text message that a final decision had yet to be made. The ICC did not want to comment.

UAE, which has international standard cricket grounds in Dubai, Sharjah and Abu Dhabi, has been the preferred venue for both India and Pakistan to stage the final leg of their domestic T20 leagues this year.

Abu Dhabi hosted the remaining 20 matches of the Pakistan Super League, including Thursday’s final, after the Pakistan Cricket Board was forced to suspend the league in March.

World governing body ICC had set a June 28 deadline for the BCCI to take a decision on hosting the tournament. The Indian board will retain hosting rights for the event regardless of where the tournament is played.

Cricket website ESPNcricinfo.com reported that the World Cup will kick off from Oct. 17 in UAE.

The first round of the T20 World Cup is expected to be played in the UAE and Oman and will be contested between eight lower-ranked teams, four of whom will join the top eight sides for the Super 12 stage.