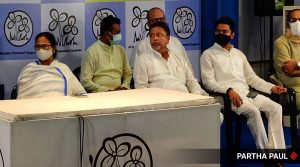 Earlier in the day, Roy arrived at the Trinamool Bhawan along with his son, where he held a meeting with Chief Minister and TMC supremo Mamata Banerjee, MP Abhishek Banerjee, and other senior leaders before formally rejoining the party.

“Mukul Roy has returned to his roots today. He could not work in the BJP. During the election, he did not make any anti-TMC statements. He has found peace by returning to his former party. He was made the national vice-president of the BJP, but he was not satisfied with the work. Mukul will continue to play the same role in our party which he used to play earlier,” said Banerjee after inducting Roy into the party.

After rejoining the TMC, Roy said, “It feels good to see my former colleagues here. Bengal will restore its glory under the leadership of Mamata Banerjee. I will issue a written statement on why I left the BJP. Under the present condition, no one can remain in the BJP.”

Also Read: Palace Intrigue Victims? Before Jitin Prasada, His Father Too Was Disillusioned with Congress & Gandhis

The development comes a month after the TMC registered a landslide victory in the West Bengal Assembly elections, winning 213 of the 292 assembly seats that went to polls.

Although Roy won the Krishnanagar North seat on a BJP ticket, he had been maintaining distance from the party after it lost the polls.

Once a close aide of Mamata Banerjee, Roy resigned from the TMC in September 2017 and was suspended by the party for six years for anti-party activities. He joined the BJP in November that year. In September 2020, Roy was made national vice-president of the BJP. Roy’s son Subhrangshu too joined the BJP in May 2019.

Subhrangshu, also a former TMC MLA, lost from the Bijpur seat in this year’s Assembly polls.

Speculation about Roy’s return to the TMC began after his son Subharangshu wrote on Facebook that “self-criticism was more necessary than criticising a government elected by people.”

Also, Abhishek Banerjee — TMC MP and nephew of Mamata Banerjee — had last month visited Roy at the hospital where his wife was admitted. The next day, Prime Minister Narendra Modi personally had a conversation with Roy on phone.

Milkha Singh no more; passes away aged 91 due to COVID-19 complications