8 states get new governors in a rejig ahead of Modi cabinet reshuffle, Thawarchand Gehlot sent to Karnataka 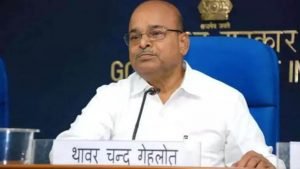 Amid buzz of Union Cabinet expansion, the President appointed eight new governors on Tuesday. The major reshuffle ahead of the expected Cabinet reshuffle saw the appointment of Union Minister Thawarchand Gehlot as the Karnataka Governor.

While the Union Minister for Social Justice and Empowerment was appointed as the Governor of Karnataka, Bandaru Dattatreya was sent to Haryana after a stint in Himachal Pradesh.

Rajendran Vishwanath Arlekar was appointed as the Governor of Himachal Pradesh. He has represented Pernem in the Goa Assembly.

Satyadev Narayan Arya was appointed as the Governor of Tripura and Ramesh Bais was given charge of Jharkhand.

With these appointments, there is now a record number of SC, ST and OBC Governors in the country. A substantial number of gubernatorial assignments have been given to those hailing from the SC communities.

This includes Thawarchand Gehlot, who is among the BJP’s tallest SC leaders. Rajendra Arlekar will now become Governor of Himachal Pradesh and Narayan Arya will take charge as the Governor of Tripura.

Baby Rani Maurya is currently serving as the Uttarakhand Governor.

Tamilisai Soundararajan serves in Telangana with additional charge of Puducherry.

Three Jat leaders are currently serving as governors. It is for the first time perhaps in India’s history that there are three Governors belonging to the Jat community.

While Jagdeep Dhankar is in the politically crucial state of West Bengal, Acharya Devvrat is the Gujarat Governor. Satyapal Malik is serving as the Meghalaya Governor.

Appointments ahead of Cabinet rejig
The appointments have come ahead of the expansion of PM Modi’s cabinet, which is expected this week.

Sources have told India Today that it would be a major reshuffle that may see the induction of over 20 new ministers in the cabinet.

The sources said that besides the poll-bound Uttar Pradesh, big states such as Maharashtra and West Bengal, which recently went to the polls, may see greater representation in the Union cabinet.

“It is not going to be a minor arrangement, but a major reshuffle,” sources told India Today on Tuesday. The sources added claimed that some ministers might lose their ministerial berths.

If the prime minister goes ahead with the exercise this week, he will be expanding his Council of Ministers for the first time since assuming the charge in May 2019 for the second term.

The current strength of the Council of Ministers is 53, excluding PM Modi. Its maximum strength can be 81.

Tokyo 2020: Mary Kom’s bid for 2nd Olympic medal over after Round of 16 defeat to Colombia’s Ingrit Valencia